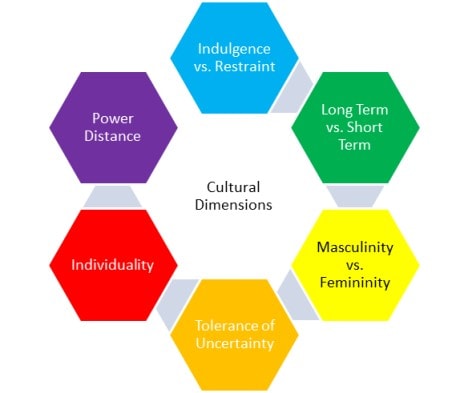 Every nation is perceived in the minds of people differently for its culture, for its standard of living and for some unique quality of people in the nation. Some countries are known for good things, some for bad and others are perceived with a mixed reaction. Culture is a strong element of people’s lives. It controls their views, their values, their humor, their hopes, their loyalties, and their worries and doubts. So when you are working with people and building relationships with them, it helps to have some perspective and understanding of their cultures.

In large organizations cultural differences can act as a barrier to communication, and they can affect team building. Employees need to build understanding of other cultures to work effectively with people from different cultures. Psychologist Dr Geert Hofstede – a Dutch Social Psychologist and employee of IBM published his cultural dimensions model at the end of the 1970s, based on a decade of research which he conducted in IBM from 1965 to 1971. Since then, it’s become an internationally recognized standard for understanding cultural differences.

Hofstede studied people who worked for IBM in more than 50 countries. Initially, he identified four dimensions that could distinguish one culture from another. Later, he added fifth and sixth dimensions, in collaboration with Dr. Michael H. Bond and Dr. Michael Minkov. Hofstede, Bond and Minkov scored each country on a scale of 0 to 100 for each dimension. The six dimensions are as follows:

Power Distance Index: Hofstede’s Power distance Index measures the extent to which inequality and power are tolerated. High power distance index indicates that a culture accepts inequity and power differences, and it encourages bureaucracy. It also shows high respect for rank and authority. Low power distance index indicates that a culture encourages organizational structures that are flat and appreciate decentralized decision-making responsibility, encourage participative style of management, and places emphasis on power distribution. For example, Germany scored 35 on the cultural scale of Hofstede’s analysis, compared to Arab countries where the power distance is very high; it scored 80 and Austria where it very low with a score of 11.

Individualism versus Collectivism: This dimension considers individualistic approach versus collective approach of a society.  A person’s self-image is defined as “I” in loosely-knit social framework. Each individual in a family is expected to take care of only himself/herself.  As opposite to this, in collectivism, the families are tightly-knit in society in which individuals can expect their relatives or members of a particular group to look after them in exchange for unquestioning loyalty. A society’s position on this dimension is reflected in whether people’s self-image is defined in terms of “I” or “we.” Japanese are known as a collectivistic society (scoring 46) whereas the United States can clearly been seen as individualistic society (scoring a 91).

Masculinity versus Femininity: The masculinity vs. femininity dimension is also referred to as “tough vs. tender,” and considers the preference of society for achievement, attitude towards sexuality equality, behavior, etc. The Masculine side of this dimension represents a preference in society for achievement, heroism, assertiveness and material rewards for success; such a society at large is more competitive. As opposite to this trait, in feministic trait preference is given to cooperation, modesty, caring for the weak and quality of life. Such society at large is more nurturing.  In the business context Masculinity versus Femininity is sometimes also related to as “tough versus tender” cultures. Japan is considered to be a very masculine country, whereas Scandinavian countries such as Norway and Sweden are considered highly feminine.

Long versus Short-Term Orientation: Different cultures have different expectations or assign different meanings to what time is. Some cultures perceive time to be scarce, while others believe time to be infinite. Some view time management as a skill while others find it unimportant. Every society maintains link with its own past while dealing with the challenges of the present and preparing for future. Long-term orientated countries focus on the future. China and Japan are known for their long term orientation. Short-term oriented countries focus on present and past more than the future. Asian country such as Morocco is a short term oriented country.

Indulgence versus Restraint: The Indulgence dimension is a relatively new dimension of the model. This dimension is defined as the extent to which people try to control their desires and impulses, based on the way they were raised. Relatively weak control is called Indulgence and relatively strong control is called Restraint. Cultures can, therefore, be described as Indulgent or Restrained. Indulgence stands for a society allow relatively free gratification of basic and natural human drives related to enjoying life and having fun. The best example of this is USA. Restraint stands for a society suppress gratification of needs and regulate them by means of strict social norms. The example of this is Russia, Eastern European countries such as Belarus, Bulgaria, Czech Republic and Hungary.